If you are one of those people who enjoys a good cup of coffee, then you have come to the right place. Cafés ­ both traditional Arabic and Western ­ are scattered all over the island and the choices are fabulous.

But first let me give you a little background. It is believed that the first coffee tree was probably grown in Kaffa, in a country we know today as Ethiopia. Arabic coffee has been part of the culture here for centuries. When Arabic coffee is offered to a guest, it is considered a gesture of friendship.

Traditionally, ghahwas (coffee houses) were found in the souk and were designed with a very simple style: high wooden benches arranged in a square to give customers the opportunity to chat. Ghahwas served the urban population at a time when communication systems were rudimentary. Without telephones, telegraph or even a fully functioning post office, person-to-person contact was the only effective way of getting news or spreading gossip. Not only did the coffee houses disseminate news, they also manufactured it. 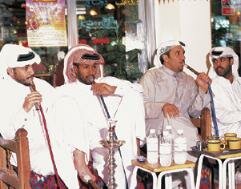 However, today Bahrain has taken this tradition to another level, mixing local and international customs and introducing a whole new coffee house culture. The traditional ghahwas developed into luxuriously decorated places where music, chess and shisha (hookah or hubble bubble) can be enjoyed.

At every table you will find men and women puffing on the shisha pipe and blowing through their half-closed lips long jets of aromatic smoke that fills the air with its distinctive scent. Some will be playing cards, some backgammon and some talking eagerly among themselves.

While once it was rare to see a non-Arab or a woman at a traditional coffee house, the newly-opened cafés have made it fashionable for visitors and expatriates of both sexes to drop in.

To cater to wider tastes, cafés now offer numerous blends and flavours of tea and coffee. The success of a café depends on the ambience, food, its tea and coffee menu, and above all, an experienced shisha man.

Apart from the traditional coffee shops, there has been an explosion of sorts of the Western-style cafés. The district of Adliya is lined with many cafés that have opened up in recent years, offering not just coffee concoctions of every type, but also excellent salads, light meals and desserts served up in homey surrounds.

Bahrain also has its fair share of Internet cafés ­ Idea Gallery arguably being the pick of the lot ­that combine high-tech computer access with laid-back social surroundings. These cafés are popular with students, tourists and many others in need of a web-fix.

Arabic coffee and a
matter of tradition

Bahraini Ghada Al Ansari is a frequent visitor to the island's many Arabic cafés.
Because she loves socialising and meeting new people, she made time in here hectic family/work schedule to study and eventually work as a public relations executive at Gulf Hill and Knowlton.
She counts among her hobbies photography and reading books that "explore the humaan mind". She loves snorkelling and fishing, and promises to one day start diving and clean up the ocean bed!