WHAT is the only gem in the world that requires no further processing? That's right, its the pearl.

This highly valued gem has been appreciated for thousands of years. Nobody knows where the first pearls were discovered. The old civilisations in Persia, Bahrain and India were among the first to notice the magical beauty of natural pearls. Ever since they have been highly prized by gem collectors, revered by artists and mythologists and appreciated by fashionable women throughout the centuries. Tradition says the lustrous pearls that gleamed on the breast of the Queen of Sheba were fished up from the dangerous depths of Bahraini waters. And Ishtar, the dissolute Babylonian princess, is said to have worn a necklace of Bahraini pearls which was so long that even when she stood upright it reached to the ground!

Pearls have long symbolised power, fertility, romance, good healthÉ old Egyptian medicines often contained ground pearls. They have been used to adorn temples and clothes in trying to harness the supernatural powers that were believed to exist in these beautiful gems.

Pearls have risen markedly in value in recent years, as water pollution has damaged both natural and cultivated oyster beds. 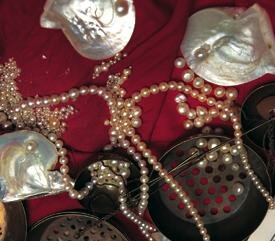 What is a pearl?

Technically speaking, a genuine saltwater pearl (like the ones in Bahrain's waters) is produced as an abnormal growth within the shells of certain bivalve mollusks: saltwater pearl oysters, saltwater and freshwater mussels, and some species of clams and abalones. All these mollusks have an inner layer of shell made of a lustrous material called nacre, or mother-of-pearl.

When a bit of foreign matter enters the shell ­ a grain of sand, a parasite, an undeveloped egg ­ the mollusk isolates it by gradually coating it with layers of nacre. The process is slow; it may take three years or more for a mature mollusk to produce a pearl large enough to be commercially valuable.

The most prized pearls are taken from saltwater mollusks and are classed as Oriental. The finest Oriental pearls are produced by the mohar, a variety of the Pinctada martensii species of saltwater mollusk. Found in the Persian Gulf, the pearls come from depths of eight to 20 fathoms (48 to 120 feet). They have a high degree of iridescence and lustre; the refraction and reflection of light is caused by the overlapping arrangement of various crystals on their surface. Freshwater pearls usually lack a significant degree of iridescence.

Colour, which is identical with the colour of the nacreous shell-lining, is also important in determining value. Pearl colour varies from white through pale shades of rose, yellow, blue, and green to brown or the dark gray that is the colour of a black pearl. The most valuable colours are white, cream, rose, and black. Pearls are rarely perfectly round; irregular shapes, called baroque, are less prized because they are more commonly found.

Oysters are gathered by dragnets or by pearl divers, who often must descend to great depths. Of the thousands of oysters gathered, only a small fraction bear pearls, and an even smaller fraction (perhaps one in ten thousand) bear pearls of gem quality. The nacreous shell of the pearl oyster, however, if it is thick enough, is valuable for its mother-of-pearl.

In the 1890s the Japanese developed a method to produce cultured pearls that is commercially effective. Beads made of mother-of-pearl are inserted into the shells of three-year-old oysters, which are then placed in cages in the waters of a sheltered bay. Nacre forms around the beads, and the oysters are harvested from 10 months to three-and-a-half years after the bead insertion. The harvesting time depends on the rate of nacre deposit, which differs in different waters. The thickness of the deposit is usually only one-sixth to one-tenth of the total diameter of the pearl.

Although a professional can usually distinguish between a cultured and a natural pearl, there is no difference in appearance to the ordinary eye. In all saltwater pearl fisheries, production has declined significantly since the widespread introduction of cultured pearls.

The new freshwater cultured pearls from China has changed everything that has stabilised the industry for the past 80 years.

In just a short five-year period, China has begun producing high quality cultured pearls that buyers thought were only available in Japan ­ and at a fraction of the cost.

For the jewellery industry, this is more of a revolution than evolution. Highly publicised is the news of Japans current woes in producing fine pearls. A combination of overcrowding of oysters, polluted waters, and a vicious virus has decimated much of the current crop there, and the future looks just as grim as the present for a return to the years of bountiful salt water pearl harvests. In comparison, Chinas clear, fresh water is the perfect environment for growing quality pearls.

China began producing inexpensive off shape tissue nucleated pearls over 30 years ago, but it was not until the last few years that high quality round pearls began to appear. Learning how to improve production techniques, they steadily began improving their crops, creating larger, rounder and brighter pearls than ever thought possible.

China can produce 40 pearls per mollusk, compared to as little as one pearl per oyster in Japan. Combined with the lowered labour costs in China, and the elimination of a costly bead nucleus, fine Chinese pearls sell for a fraction of their Japanese counterparts in larger sizes.

Simulated pearls are made by coating glass or plastic beads with a liquid, called pearl essence, extracted from herring scales.

These imitations are markedly different in colour and lustre from genuine pearls and are always lighter in weight.

How pearls are valued

Though the sales of pearls have been skyrocketing, they have risen markedly in value in recent years, as water pollution has damaged both natural and cultivated oyster beds.

The more perfect its shape (spherical or droplike) and the deeper its lustre, the greater its value. Only those pearls produced by mollusks whose shells are lined with mother-of-pearl (e.g. certain species of both saltwater oysters and freshwater clams) are really fine pearls; pearls from other mollusks are reddish or whitish, porcellaneous, or lacking in pearly lustre.

Until the discovery of oil in 1932 Bahrain was the pearl capital of the world. Even before petroleum outranked pearls as a source of riches, Bahrain had the highest per-capita wealth on earth!

Saltwater pearls can be found from around the world, but the finest ones come from the Persian Gulf, especially from the area around Bahrain. This is due to the influence of underground freshwater springs which permeate the oyster beds. No other natural pearls possess quite the same luminous lustre.

For centuries fortunes were fished up from the seas surrounding Bahrain. In the middle of the 19th century, there were close to 30,000 people employed by the pearling industry and more than 4,000 pearling boats! The discovery of oil in 1932 signalled a fairly rapid decline in this profession which is now more or less extinct.

The government however has moved to protect this great legacy by promoting recreational pearl diving in this country on an international scale.

It has also banned the sale of imported or cultured pearls, which means the gems you see in Bahrain are natural pearls, the genuine article.

They are, in a word, priceless.

Only 5 per cent of oyster shells contain pearls. Of those that do, only 5 per cent have pearls of any commercial value ­ that is, more than 2mm in diameter. Is it any wonder that natural pearls are so valuable?

The necklace that took 14 years to complete

Find a pearl - and it's yours to keep!