How Islam came
to Bahrain

Bahrains history had opened it to a multitude of cultural influences, and when the first Muslims arrived in the seventh century, there were already a number of other faiths, including Christians, Jews and Zoroastrians.

The then ruler of Bahrain, Munthir bin Sawa, however was drawn towards Islam, and following contacts with Prophet Mohammed through his companion Abialaa Ali Hadhrami, he and his followers soon embraced the faith. 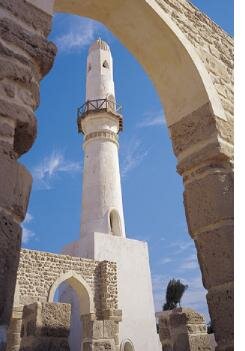 Work on the Al Khamis Mosque, which has recently been renovated, was started around this time, though it would not be complete until two centuries later and its distinctive twin minarets erected even later, around the 15th century.

The mosque is one of the most ancient in the Arab world, and stands testimony to one of the defining periods of Bahrains history.

The imposing interiors of the Grand Mosque

In search of the
Garden of Eden